PROGRAM DESCRIPTION:
Transit systems were considered vital war industries, yet it was difficult to keep the trolleys running during the Second World War. Labor and equipment shortages, and a strike involving an army takeover of at least one Pennsylvania property were only some of the issues faced by those running public transit in Pennsylvania. Join volunteer George Gula to see how transit successfully overcame all obstacles and accomplished is role during WWII.

BIO:
Born in Scranton, George Gula spent his first seven years in Philadelphia, where he developed his interest in streetcars. Returning to Scranton in the late-1950’s, that interest continued as he became immersed in the region’s streetcar systems and its local history. After graduating from Penn State with a degree in Business Logistics, his entire working career was spent working in the public transit industry, first with the County of Lackawanna Transit in Scranton, and then at the Port Authority of Allegheny County in Pittsburgh, where he worked in the Schedules and Operations areas from 1975 until his retirement in 2018.

Open to the public and free. -Bring a friend. 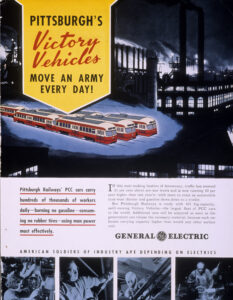