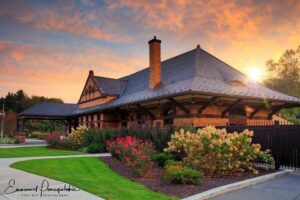 The Charter Day Dinner to be held Wednesday, October 6 at Beaver Station at 6 p.m. is an annual event for members of the Beaver Area Heritage Foundation. This year marks our 53rd year of our founding. It is a time of review, reflection and celebration of our many accomplishments and service to our local community. This event is open to the public. Reservations are $40 per person. Visit rsvp.beaverstation.org for more information. 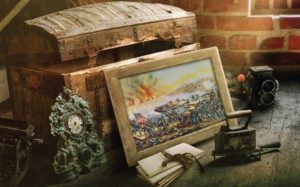 Imagine clearing out your family attic and discovering hundreds of letters written during the Civil War. Join us as Dr. Young shares about being faced with that very situation. Not knowing why his family had the letters, Dr. Young used the resources of Ancestry.com and other sources to discover how two Vermont soldiers fit into his family heritage. Using excerpts from their letters, which are filled with in-depth accounts of battles and army life, Dr. Young has woven together their dramatic war-time narrative into the context of the war and adds in additional information about the friends and relatives who fought by their side. This event is free and open to the public.

Past displays have featured a celebration of the life and work of Beaver’s Priit Vesilind, longtime writer and editor with the National Geographic; sports heroes and musicians of Beaver and the Beaver Valley; Beaver’s record-setting Mayor, the late Robert Linn; firefighting in Beaver; and the actual pistols used in a fatal 1770s duel between Gen. Lachlan McIntosh, builder of Fort McIntosh in Beaver, and Button Gwinnett, a signer of the Declaration of Independence. Other rotating exhibits have featured Beaver College, early firearms and model riverboats.

Annual Beautification Awards – The Heritage Foundation annually sponsors its prestigious Restoration and Beautification Award, known as the Harry Phillips Award in memory of our founder.  The Award, a handsome plaque, is presented at the annual Charter Day Dinner for residential and commercial buildings which have been meticulously restored to their original appearance. Past winners have been the Todd Funeral Home on Third Street which was restored after a disastrous fire (seen here) and the John F. Dravo house on River Road.

Garrison Day – The annual Garrison Day Show and Sale, held in the beautiful green central parks of Beaver, is one of the community’s largest, most exciting and visible events each year, drawing more than 10,000 visitors annually. Garrison Day, named in honor of the military garrison stationed at Fort McIntosh in the late 1700s, involves hundreds of arts and crafts and antiques vendors, a variety of food and refreshments, an art show, music by the Fort McIntosh Fife and Drum Corps, and other lively entertainment. For questions, please contact event coordinator Carrie Ondrusek at 724-241-3288 or garrisonday@beaverheritage.org. Click here for Vendor Registration.

Fourth of July Week “Concert in the Park” – In years past, the Heritage Foundation has helped sponsor a free patriotic music concert at the gazebo. Notable Independence Day celebrations over the years have included a popular “walking tour” of the Beaver Cemetery and a tour of notable local buildings of historic interest. The cemetery tours, led by Heritage Foundation historians, have visited the graves of Beaver notables Senator Matthew Stanley Quay, industrialist John Dravo, Pennsylvania Supreme Court Chief Justice Daniel Agnew and other fascinating personalities of the past. The very first cemetery walking tour, conducted to high acclaim, was held in 1978 and repeated in 1985, 2002 and 2005.

Beaver Tales – The widely acclaimed, annual “Beaver Tales” storytelling event, sponsored by the Beaver Area Heritage Foundation, returns to Beaver. We are so excited to be welcoming this diverse group of storytellers to Beaver County to help connect our communities to the world and celebrate different cultures! Also, our storytellers will be entertaining and captivating school children and students throughout the county at Elementary Schools and the Beaver Library. The culmination of the Beaver Tales Storytelling Festival will be a special evening event at the gazebo in Irvine Park (the alternate / inclement weather location will be College Square School).