First Post of the First American Regiment – The Old Guard

With the defeat of the British in 1783, which ended the Seven Years War and, for all practical purposes, the War for Independence, the Continental Army was disbanded and the soldiers who had fought the war returned to their homes and families.

In 1784, Congress authorized the formation of a military security guard, “Not to exceed 700 in number,” to defend the western settlements in Pennsylvania and Ohio, and arranged for a new treaty proclamation to be drawn under which the Indian nations in these areas could be pacified.

Col. Josiah Harmar was charged with recruiting and establishing this security guard, which was done in the summer and fall of 1784. It consisted of roughly 500 men, recruited mostly from Pennsylvania and Virginia. Harmar named this group the “First American Regiment,” signifying its position as the first peacetime army of the United States. The new troops initially assembled at nearby Fort Pitt in Pittsburgh. 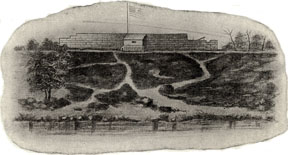 The first duty post of the First American Regiment was at Fort McIntosh in Beaver, and the first assignment of the troops was the rehabilitation of the fort built by Gen. Lachlan McIntosh in 1778. The purpose of this assignment was to prepare the site for the treaty assembly which took place in January 1785, and to guard the American Treaty Commissioners, including George Rogers Clark, who would meet with 400 Indian braves and their chieftains at this site.

Fort McIntosh was chosen as the site for the treaty gathering because of its secure position and central location with regard to the four major Indian tribes of the region. A prior meeting with the Iroquois nation had been held at Fort Stanwix in New York, but had been widely disregarded because most of the tribes affected could not travel that far and were therefore not included or represented.

Because of this sequence of events, the first duty post of the First American Regiment – later the “Old Guard Regiment” and the “Commander in Chief’s Guard” – was Fort McIntosh in present-day Beaver, PA, in view of which the site is claimed as the first peacetime home of the United States Army.

Appearances by The Old Guard in Beaver, PA:

2011 – Dedication of new monument at the fort site