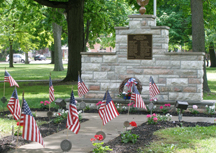 During World War II, at least 27 local service men from the Beaver Area — Beaver Borough, Bridgewater, Brighton Township and Vanport — gave their lives in the full measure of sacrifice to our nation. To us, they are military heroes whose memories live on. We honor them on this special webpage.

The following list was compiled by Ralph Morton of the Heritage Foundation, in cooperation the Beaver County Veterans Affairs office. It originally was published in the Fall 2008/Winter 2009 edition of our Foundations newsletter, following the successful 2008 display featuring “Beaver’s Greatest Generation.” An expanded version was printed in the Beaver County Times (May 23, 2009) in a front-page feature headlined: “27 Taken By War To Be Honored Six Decades Later.”

Today these names adorn a plaque on the World War II memorial in Beaver’s Irvine Square, donated by the Heritage Foundation, and re-dedicated on Memorial Day 2009.

Stephen John Anzio – Beaver. Age 19. Plane shot down off the coast of Gibraltar, Spain, July 19, 1943, while searching for enemy submarines. His body was never recovered. While at Beaver High School, was a member of the Industrial Arts Club and played intramural sports.

Wilbert Earl “Web” Black – Brighton Twp. Beaver High School football captain, 1937. Killed in Anzio landing in Italy, Feb. 18, 1944. His yearbook entry reads: “Web certainly needs no introduction. Everyone knows our genial football captain. Whether on the field or doing his share as a hall-patrolman, ‘Black’ is always willing to help when needed. He also has his friends (girl) as is shown by the increase in Isaly’s business! You’re bound to get somewhere, so keep up the good work, Web.” He received the Silver Star Medal for bravery and gallantry in combat, and three Purple Heart Medals, two for wounds received in action, and the third for his death.

William E. Carver – Beaver. U.S. Army. Died in service in North Carolina on June 6, 1944. His entry in the Shingas yearbook reads: “Billy, the guiding Star of our Annual! Without him the staff would be like a boat without oars. In the twinkling of an eye he can change from an irresponsible young boy to a sober business man. Working on the Annual has been a pleasure to him because of the sponsor. ‘Lindy’ is Bill’s special interest. Billy is also a capable basketball referee.” He also was on the newspaper staff and played baseball for Beaver High.

Ralph W. Franke – Beaver. U.S. Army Air Corps. Killed in an airplane crash during training exercises in England. Date unknown. Served as Beaver High School class president and was a member of the Student Senate. As a member of the high school orchestra and band, said his entry in the Shingas yearbook, “He makes the best excuses of which we know. Plays the trombone excellently and makes great speeches.”

Frank Grdenich – Bridgewater. Beaver High School class of 1937. Killed in an Army Air Corps P-38 Lightning fighter airplane crash in Aubusson, France, June 19, 1944.  Age 26. Initially buried in France, but later exhumed and laid to rest in Arlington National Cemetery. His name adorns a stone memorial in Aubusson, dedicated in 2001. Said his entry in the Shingas yearbook, “Smash! Who made that tackle? Don’t be silly! Who do you think? Frank, of course. Frank has worn a path from Bridgewater to Beaver and claims he could walk it in his sleep. Yes, he’s one of the shyest of hall patrons. But, seriously, Frank is a dandy fellow”

Ward R. Heath – Beaver. U.S. Navy. Killed in an airplane crash in training in 1944 in Washington.

Ernest N. Hogue, Jr. – Beaver. U.S. Army Air Corps. Killed in an airplane crash during training exercises in Alabama on May 8, 1944. During high school, he was a member of the band and orchestra, as well as the Hi-Y Club, Glee Club and Science Club.

Richard “Bones” McClure – Beaver. Died June 20, 1944 of battle wounds in France on June 6, 1944. Said his profile in the Shingas yearbook, “What a smile ‘Bones’ has!  You never saw him in a droopy mood. His failing is not studying, but he is a ‘climbing’ florist of good repute, a photographer, and an all-round good fellow.” His motto, published in the yearbook, was “Don’t take life too seriously. You’ll never get through it alive anyhow.”

Frances J. “Frank” Moravec – Bridgewater. Died Oct. 1, 1948, while serving with occupation forces  in Germany. As a Beaver High student, played football and basketball, and was a member of the Varsity Club and the Industrial Arts Club.

John Armour Roth – Beaver. Killed in France, July 7 or 11, 1944. In his profile in the Shingas yearbook, his hobbies were listed as “athletics and sleeping.” His activities included serving as Class Vice President and as a member of the Student Senate andShingas staff. He also played football, basketball and intramural sports.

John Sosnowski – Grange Road, Brighton Township – Killed on March 14, 1945, while in the line of duty with the Army in Germany. Was operating a Browning automatic rifle in battle when he was killed. Was buried in a military cemetery in Luxembourg. Age 23. Died one month and two days before his brother Vincent, below.

Vincent Sosnowski – Grange Road, Brighton Township. Naval machinist. Lost at sea on April 16, 1945 when his ship, the USS Pringle, was hit by a Japanese kamikaze pilot near Okinawa, Japan. His body was never recovered. His name is inscribed on the Tablets of the Missing at the National Memorial Cemetery of the Pacific in Honolulu, Hawaii. Age 27. Died one month and two days after his brother John, above.

Charles M. “Chuck” Wilson – Vanport. Killed in France, April 28, 1944. Played basketball and was a member of the Science Club and Vocational Club. His entry in the Shingasyearbook reads: “Chuck hails from the foreign country of Vanport, but we see him quite often at a certain house on Buffalo Street. ‘Happy-go-lucky’ fits Chuck perfectly and he is usually telling one of his famous jokes. May your life be ever as full of happiness as it was in Beaver High.”