The talented volunteers and activities of the Beaver Area Heritage Foundation and Museum regularly are in the news and have been making news for years. Back to current news (2011 to present).

Dec. 14, 2010 – A new page is added to BeaverHeritage.org, entitled “Beaver’s Attic,” featuring the individual collections within the museum that are available to researchers, scholars, writers and the community. Browse.

Nov. 6, 2010 – In a major story headlined “Exhibit Celebrates the Many Styles of Homes in Beaver,” the Pittsburgh Post-Gazettehighlights the museum’s 2010 display and mentions volunteers Ed McLaughlin, Mildred Sefton, Robert Smith and Mark Miner. Writes P-G reporter Marylynne Pitz: “Since 1802, this town 35 miles northwest of Pittsburgh has reflected the aspirations of the bankers, doctors, teachers, lawyres and politicians who inhabit its quaint streets and River Road, a lovely stretch of beautiful homes that overlooks the Ohio River. Now, this community’s architectural aspirations are on view in a concise exhibition…” Link.

Sept. 3, 2010 – More than 160 members and friends attend the 100th birthday party of the CSX Railroad bridge connecting Beaver to Monaca, held at the museum and log house campus.

April 19, 2010 – Beaver County Times – “Part of Many a Boy’s Life” – Front page feature about the Centennial of Scouting exhibit at the museum, picturing and quoting volunteer Mike Shovlin.

Spring 2010 – The Bridge Magazine of the County of Beaver, PA – Back cover pictures our log house blanketed in winter snows.

2009 – The Heritage Foundation and several of its volunteers are named in the book Bridgewater, authored by Valentine J. Brkich.

Aug. 22, 2009 – NewsRadio 1020 KDKA-AM – “Weekend Magazine with Rob Pratte” – Heritage Foundation president Edwards McLaughlin is interviewed about the museum’s “Early Days on the Farm” display and “Beaver Tales” storytelling initiative as well as Beaver’s ongoing charm as a top neighborhood in the region. 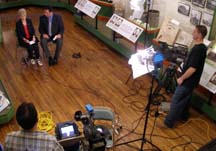