The Beaver Area Heritage Museum is once again ranked in the Top 25 museums in southwestern Pennsylvania by the Pittsburgh Business Times.

Saint or Sinner? You Decide! 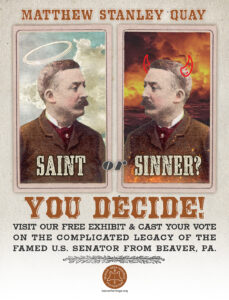 At a time when the nation’s political discourse arguably has never been at a higher pitch, the Beaver Area Heritage Museum has launched its 2022 exhibit examining a different political era of 125 years ago featuring a former U.S. Senator from Beaver who at one time was Chairman of the Republican National Committee and is perhaps the town’s most famous resident.

Entitled “Matthew Stanley Quay: Saint or Sinner? You Decide!”, the free display features a visually rich display of artifacts educating museum-goers on aspects of Quay’s complex life and legacy and asks each guest to form her or his own decision on the question, with the final tally of ballots to be announced at the end of the season.

The exhibit includes a wide array of original, vintage photographs and papers from Quay’s life and career, dating from his birth in 1833 to death in Beaver in 1904. These include more than a dozen political cartoons from some of the country’s leading contemporary newspapers and magazines, images of Quay and his friends and landmark sites, and one-of-a-kind documents on loan from James A. Kehl, Ph.D., age 100, retired University of Pittsburgh dean and author of the biography Boss Rule in the Gilded Age: Matt Quay of Pennsylvania (University of Pittsburgh Press; 1981).

A video interview with Kehl was recorded earlier this year, going deeply into the elements of Quay’s personality and sources of power, and will premiere at the museum this summer. Additional research was coordinated with the Beaver County Historical Research and Landmarks Foundation. 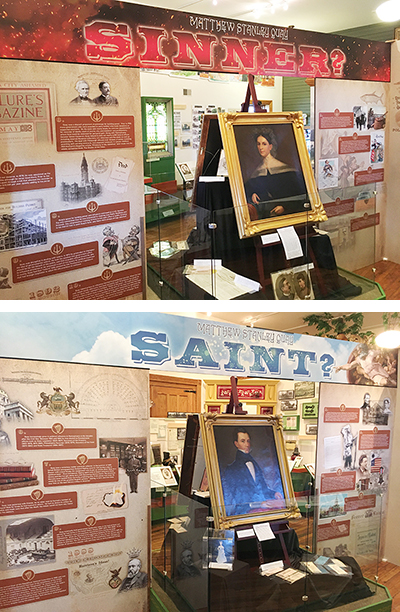 Among the exhibit’s highlights are original, large oil-on-canvas paintings of Quay’s parents, Rev. Anderson and Catherine (McCain) Quay, the father having served as pastor of Beaver’s First Presbyterian Church in the 1840s. The portraits were donated to the museum earlier this year by the church elders and members of the family in memory of Quay’s great-granddaughter, Mary Eaton Chalmers.

Some of the themes on both sides of the Saint/Sinner question include Quay’s Medal of Honor earned at the Civil War’s Battle of Fredericksburg, roles as Prothonotary of Beaver County and editor of the Beaver Radical newspaper, tenure as Philadelphia Recorder and Pennsylvania State Treasurer, relationships with minority groups, friendship with famed British author Rudyard Kipling and work behind-the-scenes in the successful presidential election campaigns of Benjamin Harrison and Theodore Roosevelt.

The museum is open on Saturdays through December from 10 a.m. to 4 p.m. between March and November.

The success of our 2022 exhibit inspired a documentary “Saint or Sinner? -The Complicated Legacy of Senator Matthew Stanley Quay of Beaver, PA (Featuring Dr. James A. Kehl*)” produced by Pacer Studios. You can watch the 35-minute documentary on our ‘Beaver Area Heritage Foundation’ YouTube Channel and the other BAHF videos in our archive.

Brought to you by the Board of Directors of the Beaver Area Heritage Foundation, in association with Pacer Studios.