The Beaver Area Heritage Museum is once again ranked in the top 25 museums in southwestern Pennsylvania by the Pittsburgh Business Times.

Take A Walk With Harry

To say Harry Frye had a love for cameras and photography would be an understatement. 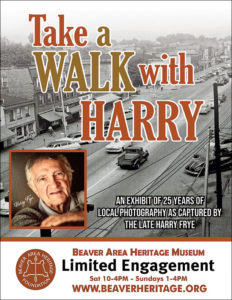 With the United States entering WW II during his senior year, he opted to forgo college and enlist in the Army, serving three years in Gen. George Patton’s Third Army in Europe. As common with returning veterans that brought back confiscated items—Harry brought back German slides depicting Nazi Germany, which helped ignite his career.

Initially working for the Latrobe Bulletin, in 1964 Harry landed a job with the Beaver County Times as staff photographer—a position he’d hold for the next 26 years. His newspaper career included photographing several US Presidents and countless regional sporting events including images of young Arnie Palmer, the Steelers ‘70s dynasty years, the Pittsburgh Pirates last season at Forbes Field, and countless photos of devastating fires, floods and local sports and news stories.

The photo exhibit is actually being displayed on a set of vintage doors that were salvaged from homes in Beaver, which were likely standing when these photos were taken or have since been demolished.